The most exciting thing that happened this week is that my friend Heidi visited us from New Zealand! She usually makes it back to the States once a year or so, and it's always good to see her.  I keep telling myself that someday I'll make it down there to visit her...maybe next year...

Last week we finally moved the (stinky, oh-so-stinky!) chicks out of my basement and into the chicken coop.  Hallelujah!  We blocked off a section of the coop to keep them safe from the bigger chickens and let them wander outside for the first time the other day under close supervision.

They are eating tons of food and growing exponentially.  They aren't quite old enough to lay yet, but they're getting there.  We're pretty sure that the chicks were mislabeled and we ended up with one Buff Orpington (the lightest one in the middle) and two New Hampshire Reds (the two light brown ones on the right) instead of the other way around.  They're always amusing to watch and the boys get such a kick out of them!

A friend got a free bouquet for signing up for a store credit card and the featured flower in the bouquet was a rather unusual blossom. 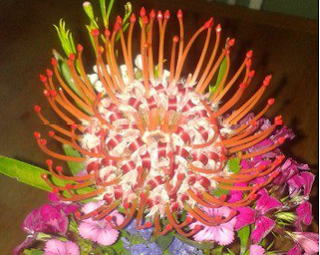 Trying to figure out what it was, our guesses ranged from a fake flower inspired by either a sea urchin or Dr. Seuss, to one grown from alien spores that arrived here during a meteor shower.  It turns out it's a real flower, very much from terra firma: a pincushion protea, native to South Africa and Zimbabwe.  Nature is infinitely creative.

We're in the middle of the fifth Little House book, By the Shores of Silver Lake, and I finally did something I've been thinking of doing since the very first book.  I started looking up the folk songs that Pa and others sing so the boys could hear what they sounded like.  Of course, there are tons of variations, but the one I looked up this morning was one that Pa sang while they traveled to their new homestead in the Dakota Territories and it's called "Uncle Sam's Farm."  I found a version of it on youtube, complete with fiddle accompaniment:


It really adds something to the story when you can hear the music they heard and sang and that made up such a part of their culture and daily lives.
Posted by Unknown at 5:00 AM