Book Review: The Key Is Love by Marie Osmond 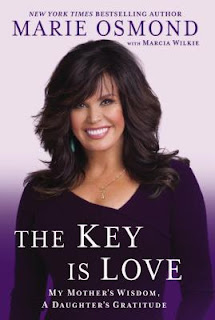 With Mothers' Day coming up in a few days, I thought it a good time to share this book, written by a Mormon mother who has seen her share of struggles.

Marie Osmond’s life may seem glamorous from the outside, but she is just as human as the rest of us. She may have rubbed elbows with celebrities from Oprah to Elvis, but she has also dedicated her life to raising eight children, some to whom she gave birth and some she adopted. In The Key Is Love, Sr. Osmond shares with us some of the hard-won lessons she’s learned over her years as a mother, as well as the wisdom her mother passed on to her.


She has dealt with two divorces, the death by suicide of a son, substance abuse by some of her children, postpartum depression, and the host of other challenges that face a single, working mother. And she doesn’t shy away from those difficult topics in The Key Is Love. In some of the most moving and emotionally raw passages in the book, she describes her son Mike and the excruciating loss and pain she felt when he committed suicide. Her stated goal in reliving such painful memories and committing them to paper is the hope that “they will be read by any person considering suicide as a way to spare your family more grief or because of a false perception that everyone would be better off without you. There is nothing better about life without you.”

Sr. Osmond told about when her daughter Jessica came out to her as a lesbian and her decision to “[stand] by her as a mom who loves her unconditionally.” She goes on to say “As a Christian, my understanding of God is that we are each created as one of His own children…I love my daughter with the same fierce love that I have for my other children. I know this is how Heavenly Father loves us, no matter what circumstances we create for ourselves or have even been put into without choice.” I hope that other parents of gay children will follow her example and continue to love their children unconditionally.

I commiserated with her as she explained that “when you are a first-time mom, I think you want to believe that there is a ‘right’ way and a ‘wrong’ way to take care of a child’s needs, until you gradually begin to understand how unpredictable being a parent can be.” I remember that time! While I was pregnant with my first, I read every parenting book I could find, determined to get the “right” way to parent all figured out before he was born. Three children and more than a decade later, I’m much more humble and willing to admit how very little I truly have figured out.

Sr. Osmond is so frank and open about the faults she perceives in herself. She frequently mentions what she would do differently, if she had certain situations to do over. She also, however, comes to the conclusion that she was doing the best she could at the time, and refuses to condemn herself for her mistakes or imperfections. She urges readers to listen to their “intuition, the whisperings of the spirit.” Rather than expecting God to “fix” our problems, she says, “God can give us the promptings and direction, but then we have to listen and be proactive in fixing it for ourselves.” She also counsels us, women especially, to find a quiet, private space and “time to refill the well so that we have more to give to others.”

The Osmond family photos included in every chapter are charming, as are the many family anecdotes Sr. Osmond shares. The love she feels for her family – her parents, siblings, and children – radiates off each page. As her mom, “Mother Osmond” wrote in her prolific journals, “Let’s all love each other. Love is the power that unlocks the door to everything. Love is the key.”

The Key Is Love: My Mother's Wisdom, A Daughter's Gratitude
by Marie Osmond with Marcia Wilkie

ISBN: 9780451240316
Buy it from Amazon here: (hardcover, ebook)
Find it at a local independent bookseller.
Look it up on Goodreads.
Check it out at your local library (find the nearest one here).
Posted by Unknown at 5:00 AM