I've been a Jennifer Garner fan since the first season of Alias. Not only is she a fun actress to watch whether doing action, drama, or comedy, but she seems to really have a level head on her shoulders.  I love what she had to say recently at Elle's annual "Women in Hollywood" event.


The disparity between men's and women's roles on the big screen has been a topic I've mentioned before.  But it's not only the treatment of women on screen where inequality is seen.  Check out this comparison Jennifer pointed out during her speech:


I told him [her husband Ben Affleck] every single person who interviewed me, I mean every single one, and this is true of the red carpet here tonight Elle, asked me, ‘How do you balance work and family?' and he said the only thing that people asked him repeatedly was about the tits on the ‘Blurred Lines' girl [Affleck's Gone Girl co-star Emily Ratajkowski]...As for work-life balance, he said no one asked him about it that day. As a matter of fact, no one had ever asked him about it. And we do share the same family. Isn't it time to kinda change that conversation?

Yep.  It's past time to change the conversation.

Another woman I've admired for years is Laurel Thatcher Ulrich, a brilliant scholar, feminist, Mormon, and writer who coined the famous phrase: 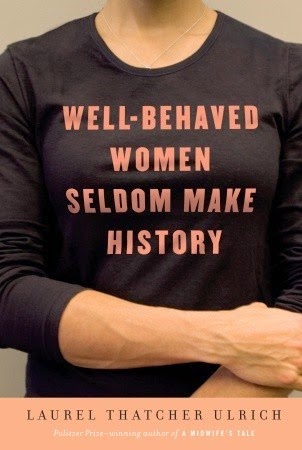 First of all, I loved this book.  Laurel teaches at Harvard, has won a Pulitzer Prize, and generally just says brilliant things about women and history and religion.

So I was excited to see this in-depth interview with her on Harvard's website.  Great insight into how she got her start and her early influences as well as what she's up to now.

It's a week before Halloween, so I'm seeing lots of the obligatory posts about awful "sexy" costumes that objectify girls and women.  There's really no excuse for "sexy nun" or "sexy crayons" or "sexy French fries" or "sexy Darth Vader".  I mean, really.

This.  So much this.

A whole lot of people are hollering about the First Amendment lately, so I thought a little refresher course appropriate.  The First Amendment does NOT mean that you can say and do anything and everything you want without any consequences.  It simply says that the federal government can't make laws that prohibit free speech.  (And even then, there are still some limitations: libel, slander, fraud, the infamous yelling-"Fire!"-in-a-crowded-theater example.  But I digress.)

It does NOT say that other people have to agree with you or that if other people express their disagreement they have to do it nicely or that others have to support what you say, or even give you space to say it.  And it doesn't absolve anyone of the requirement to follow other laws, like, for example, anti-discrimination laws that govern for-profit business operations.

To sum up, the First Amendment is not a blank check.

(Happy birthday to my favorite sister in the whole wide world!  Our mutually supportive rants and raves have gotten me through the rough parts of life more times than I can count.  It's wonderful to have a partner in heretical thought and pot-stirring who's unfailingly got my back.  Love you, Dith!)