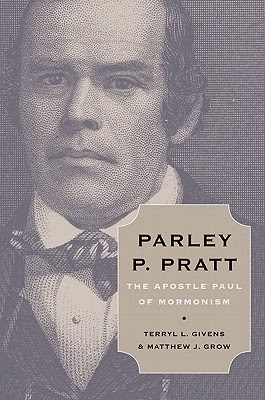 So many names from early Church history are familiar, heard over and over again as characters in a handful of stories in Sunday School class: Oliver Cowdrey, Edward Partridge, Eliza R. Snow, Thomas B. Marsh. It's not very often that we get a three-dimensional picture of the complex people they truly were, real, living breathing individuals with strengths and weaknesses, nobility and foibles, virtues and vices. With Parley P. Pratt: The Apostle Paul of Mormonism, Givens and Grow have painted a detailed and intriguing portrait of one of the more fascinating early leaders of the Church of Jesus Christ of Latter-day Saints.

Parley P. Pratt was a strong personality, a loyal friend, a loving family man, a "missionary without subtlety", a preacher with a "bold, blunt, outspoken style that led to frequent controversies", and an intellectual with a brilliant mind for theology. He served as "Mormonism's leading voice to the world" from the late 1830s to the mid-1840s. His prolific writings "systematized and popularized" Joseph Smith's teachings and he held the Prophet in high esteem with "respect for the office he held and the role he filled in the latter-day restoration", but Pratt was dedicated wholeheartedly to the religion, not just the man. "Just as Paul clashed with Peter, Pratt dissented at times from both Smith and [Brigham] Young, making clear that his commitment to Mormonism rested not on devotion to a charismatic leader but spiritual and intellectual assent to the religion's doctrines."

Givens and Grow's biography draws heavily from Pratt's own autobiography, but also from many private letters, journals, articles and other papers that flesh out his more personal opinions and feelings as well as his family life. They note that while his autobiography, similar to other contemporary autobiographies, leaves out information about his family, his letters "demonstrate great concern and longing for his family when absent, suggesting the abiding tension in Pratt's life between a religion that exalted family life...and yet required his continual absence from it for short preaching tours and long missionary journeys." His love for and attachment to his increasingly large family (he eventually had twelve wives and thirty children) is evident through his touching correspondence with them.

The Book of Mormon was key to Pratt's conversion and faith. One of Givens's earlier books, By the Hand of Mormon, explores how many early Saints focused less on the content of the Book of Mormon and more on its origin story. Pratt was an exception. "Whereas many Mormons of his generation used the Book of Mormon primarily as a sign of a divinely sanctioned restoration (a point with which Pratt wholeheartedly agreed), Pratt was one of the few who seriously probed the book's content and often preached from its pages."  His description of his conversion is well known and, I think, quite moving:


[I] opened [the Book of Mormon] with eagerness, and read its title page. I then read the testimony of several witnesses in relation to the manner of its being found and translated. After this I commenced its contents by course. I read all day; eating was a burden, I had no desire for food; sleep was a burden when the night came, for I preferred reading to sleep.

In the Book of Mormon, Pratt found "an appeal to his intellect, a spiritual confirmation of what he considered the restored gospel's reasonableness...From then on, Pratt's life would be dedicated to articulating the reasonableness, even the rational inevitability, of the book's appearance and message."

Pratt's multiple lengthy imprisonments, his poems and hymns, his marriages - and divorce, his several foreign missions, his death at the hands of his twelfth wife's estranged husband, are themselves the outline of quite an adventurous life.  Givens and Grow provide detailed background into the historical, cultural, and social settings of the time that serve to contextualize events and Pratt's choices. The difficulties and complexities of life as a member of the early Church are also addressed, both how they affected the Church membership as a whole and how they touched Pratt personally: the Fanny Alger scandal, the failure of the Kirtland Bank, the Saints' expulsion from Missouri which is "the most protracted episode of religious violence in American history", the Mormon Battalion, the martyrdom of Joseph and Hyrum Smith.

It's impossible to do justice to either the man or the book in this review, but in their 400-page biography, Given and Grow do a thorough job of showing us the complexities of the man behind the name we've heard so often. From their epilogue: "Pratt was a missionary, hymnist, explorer, politician, theologian, satirist, editor, and historian--but his acute sense of history left him convinced that his definitive role was that of apostle in 'the most interesting [dispensation] that ever was.' And that same sense shaped his mission as a chronicler...Pratt the theologian and polemicist did more than any other man to turn Joseph Smith's prophetic declarations into a fully formed new religious system."

We honor his efforts and memory, his life-long dedication to the gospel, by learning more about him.