SpokaneFāVS turned 3 and we had a party!! 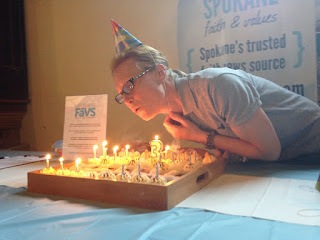 A few dozen of us met up at Boots Bakery, ate some yummy vegan appetizers and delicious mini-cupcakes, rubbed shoulders with other Spokanites interested in interfaith conversation, and just generally had a great time.

Last week I linked to a series on Keepapitchinin about women's portrayals in Mormon history. And then Ardis announced that She Shall Be an Ensign is the title of her upcoming book, which will be "a history of the Church of Jesus Christ of Latter-day Saints, told through the lives of its women"! Ardis is hoping to have it published by Mothers' Day next year and I can't wait!

Learn more about this desperately needed project and donate to help make it happen at her Kickstarter. And go like the facebook page, too, to get updates. I love hearing the stories of women, especially in their own words, and learning from their wisdom and perspective. Women's voices have been largely absent in the telling of the history of the Church, and Ardis is the perfect person to correct that fault and bring this to fruition. I'm so excited!

I've linked to several of the individual "100 Years of Beauty" videos before, but here they are all in a single playlist on youtube! There are videos demonstrating a century of hair and makeup styles in India, Korea, the Philippines, Mexico, Iran, and two in the U.S., and then there are also some videos about the background research for some of the looks, too.  Fascinating...

This slideshow has 33 different maps of the United States or the world. From the highest paid public employee in each state, to the deployment of American troops around the world, to the most insanely gerrymandered congressional district, to the most popular website per state, each map reveals some interesting things about our nation.

And as a bonus, here's a map showing the most popular word using in online dating profiles in each state. Michigan and Ohio both like bonfires. Virginians mention the military. And Indianans like their Nascar. Washington and Arizona have the same word...who would have thought?
Posted by Unknown at 5:00 AM