Yeah, I know I missed last week. I actually had one all written, but I was (well, still am) processing a particularly fraught topic in that post and I'm not ready for it to be out for public consumption yet, so you'll just have to wait...

And yeah, I know this one should have been up yesterday, but it's been a busy week here.  Tuesday evening we had a windstorm that resulted in 71 mph winds, two fatalities, and the worst power outage this area has ever seen. And then temperatures dropped into the 20s Wednesday night.

Our family was actually very fortunate in that we never lost power, internet or cell phone service, but most other people in the area did. As of Saturday morning, I have several friends who still don't have power.

We did have two trees come down. The first missed our van by inches: 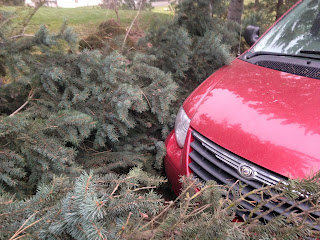 And the very top hit one small section of the fence around our pool: 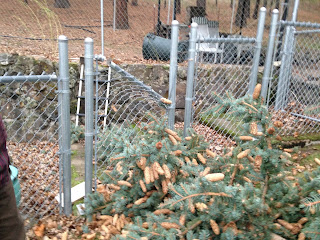 This was the view from our house: 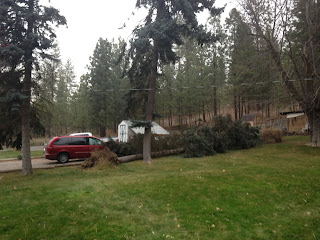 And then we spent the next two and a half hours biting our nails, watching the next one (in the center of the picture above) sway 45 degrees in the wind, with its roots swelling up through the ground, and then stand back up until it finally fell over. The top got caught up in the maple tree, so it didn't cause any damage or even hit the ground.

It could have been much, much worse.

Here are a couple of angles on the two trees the morning after: 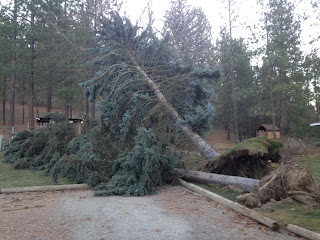 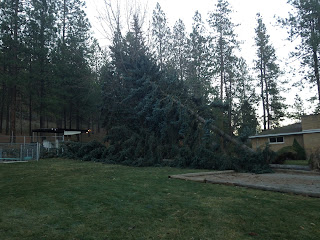 A friend came over on Wednesday with his chainsaws and Gene was able to get most of the day off, so they were able to get the trees limbed and cut into chunks. We've got it mostly cleaned up at this point, except for the stumps. As we drive around town, though, there are still trees down all over, though most aren't blocking roads anymore. Trees on top of houses and cars, fences blown over, downed power lines, trucks holding up power poles, whole neighborhoods still dark. School was cancelled for three days this past week and I'm not confident they'll have them open again on Monday and Tuesday before Thanksgiving break.

It's been quite the adventure.

And then, even though I don't drink, I found "Decades of Drinks" fascinating:

Alanis Morissette provided the soundtrack to my late high school/early college years. I can't believe it's been 20 years since "Ironic" came out, but I love her updated version:

My business partners at Me2 Solutions (i.e., my dad Frank and sister Meredith) and I have launched a new podcast called "The Hidden History of Business". It combines all sorts of subjects that we love to geek out about including, of course, history and business, but food and feminism and warfare and other random topics. Click here to go to the facebook page and "like" it to receive updates. Or go to the website here to listen to all of the episodes in order. We're also on iTunes!