It just so happened that my post-surgical self-imposed exile-from-most-human-interaction fell over General Conference weekend. (For those unfamiliar with this event, twice annually the leaders of the Church of Jesus Christ of Latter-day Saints gather in Salt Lake City and broadcast sermons to the world-wide membership of the church: one session on a Saturday evening and then five sessions total the following Saturday and Sunday.) This allowed me a perfect opportunity to sit and listen to the messages with fewer distractions than normal (not no distractions, of course; pain meds and children were integral parts of my weekend).

On the whole, this was one of the most Christ-centered General Conferences in a while. I heard sincere love and concern, tenderness and an effort to reach out and understand. It really was a gathering of imperfect people doing their best to express the thoughts of their hearts and imperfect people doing their best to listen and understand how best to improve moving forward.

As is inevitably the case in any large conference with almost twelve hours of sessions addressed to more than 15 million people in a dizzying myriad of situations all around the world, some of the dozens of talks last weekend and this spoke directly to me and my personal challenges at this point in my life; some didn't; and some I'm not so sure about. Some were instant favorites that I look forward to re-reading again and again; some I wasn't very fond of at first hearing, have questions about, and I'll need to re-read them again and again as well. I take very seriously the charge to seek personal revelation and confirmation of the messages shared, as well as to apply the individual promptings I receive as the Spirit guides.

I have friends for whom Conference seems to have been an unadulterated uplifting and edifying bathing in the Spirit, where every word seemed to come with a golden heavenly stamp of approval joyfully and easily welcomed as it fell from the lips of the speaker. And I have friends for whom Conference was painful, triggering, and disappointing, where certain aspects made them feel alone or misunderstood or unheard. And many - including myself - for whom it was a mixed bag somewhere in between.

I guess what I'm saying is, let's be gentle with each other. None of us experiences life's challenges and joys and heartaches and lessons exactly the same as anyone else, and I firmly believe that is a strength to our community of Saints, not something to shy away from or fear. One of the repeating themes of this Conference was the infinite worth of each human soul as a daughter or son of heavenly parents, and the related pleading that we more clearly see each other as children of God and treat each other accordingly.

We can all do a little better in that regard.

I still wasn't feeling 100% Sunday evening, but I was determined to go listen to President Ellen Johnson Sirleaf at Gonzaga University. President Sirleaf is the current leader of Liberia and one of the 2011 Nobel Peace Prize laureates and has been instrumental in moving her country - and especially the Liberian women - forward in educational and employment opportunities. She also recently had to manage the terrifying Ebola outbreaks in Liberia and handled the crisis decisively, with strength and grace. I admire her greatly.

So I got out of the pajamas I'd lived in for a few days and met my sister at the McCarthey Athletic Center. We arrived early enough to snag fifth row seats! 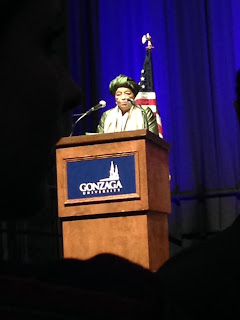 I'm so glad I made the effort. President Sirleaf's remarks were stirring and inspiring. She has withstood great trials in her life, made great sacrifices to serve her people, and is seeing the fruits of her efforts in her beloved country. Education and literacy is increasing, women fill 30-35% of the leadership positions in government, communities feel - and are - empowered to address their own issues and participate in the solutions. The economy, infrastructure, and health systems are being slowly rebuilt after the devastation of Ebola. 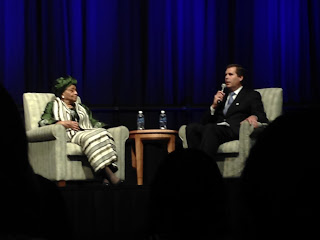 As Africa's first democratically elected female head of state, she recognizes, she said, that she represents the aspirations and expectations of women in Liberia, in Africa, and around the world. She is devoted to changing things for the better, but it is the resilience, the determination, the commitment, and the industry of the people of Liberia, she says, that is making the change happen.

Last week, my friend Kim invited our family to come celebrate Sukkot with her family and friends. Sukkot is also known as the Feast of Tabernacles or the Feast of Booths. It's a Jewish harvest festival and also a commemoration of the Exodus, forty years of wandering in the wilderness and living in temporary booths or tabernacles.


Wonderful food, fun conversation with interesting people, and my boys had a great time, too!

Early October is a busy one for birthdays around here. 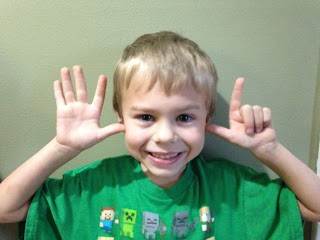 And then Josh broke into the double digits! 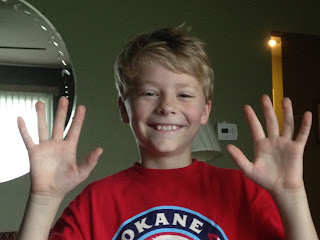 Happy birthday, my boys!
Posted by Unknown at 9:00 AM