Another episode in Anita Sarkeesian's Tropes Vs. Women in Video Games series was released this week!  Women as Reward has some excerpts from game footage that contains disturbing sexually explicit content and rampant objectification of women, so consider this a trigger warning.


A couple of excerpts:


We’ve coined the Women as Reward trope to describe a long-running pattern found in interactive media. It occurs when women (or more often women’s bodies) are employed as rewards for player actions in video games. The trope frames female bodies as collectible, as tractable or as consumable, and positions women as status symbols designed to validate the masculinity of presumed straight male players...The result of this incentive structure is that access to women’s bodies, women’s affection or women’s sexuality is reduced to a simple equation that guarantees delivery as long as the correct set of inputs are entered into the system.

In this way the Women as Reward trope helps foster a sense of entitlement where players are encouraged to view women as something they’ve earned the right to by virtue of their gaming actions, skills or accomplishments.

When women are used as sexualized experience point dispensers, the sexual scenarios are themselves a reward designed to validate the masculinity of presumed straight male players. But there’s a dual reward here: absorbing these expressions of female sexuality carries with it the ability for male characters to grow stronger, faster and more capable, reducing the women to points in a mathematical equation that directly links the flippant consumption of female sexuality to an increase in male power.

Note that, while the consumption of women makes male characters more powerful it has nothing to do with mutual relationship building. The “relationship,” such as it is, ends with sex, or rescuing the woman. At that point, she has served her purpose. Players have reaped the benefits and her value has been depleted. Like an empty energy drink container, she is simply cast aside after being consumed.

These videos are eye-opening and enlightening, and frequently disturbing and upsetting. I admire Anita's ability to identify discrete individual examples of problematic elements in pop culture and show how they are linked not only to each other, but to overarching societal trends.

And here's a bonus article: an interview with Anita Sarkeesian calling a spade a spade, or rather, calling a "troll" an abuser.

I posted this on my personal facebook page a couple of days ago, after observing several posts from friends which not only expressed their deeply held opinions, but also vilified those who disagreed with them. 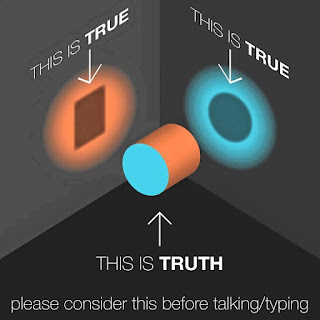 I have facebook friends with political, social, religious, and economic views that span a wide, wide spectrum. It's not at all uncommon for two posts expressing diametrically opposed opinions to show up right next to each other on my news feed. And having been blessed (cursed?) with the ability to see many sides of an issue, I almost always recognize elements of truth in each viewpoint.

So, PSA: Please remember that there is always another angle from which to view any issue, particularly deeply meaningful ones. Please assume goodwill even - perhaps especially - from those with whom you disagree, and seek for the common ground that exists. Please don't presume that any one person has all the answers that work in every situation across the board, or that those with different experiences are "wrong".

Please consider that you may not have all the facts, that others may have something to teach you, and that, in fact, you may even be mistaken. As fallible human beings, that possibility should always be on our radars, as should a willingness to listen and learn and grow.

By all means, hold strong and passionate beliefs and opinions. But please make sure that they are informed by facts, that you've at least heard and considered the "other side", and that you don't vilify other children of God in your expression of them.

If you have a 4th grader, you can get access to every National Park for free for a full year! Just go here and print out the pass - it's good for the whole family. We don't live close to too many National Parks, but we're going to have to try to hit at least a few before the end of next August.

This is a fabulous initiative from President Obama, whether you agree with his politics or not.

While a lot of the headlines went to Josh Duggar and Christian hypocrisy in the recent Ashley Madison scandal, I was most disheartened by this one: "Pure America: Meet the Only Three Zip Codes Without Any Ashley Madison Users."

And the article posits that it's really only because these three zip codes are small, rural, and have little internet access.

I have never seen a greater threat to "the sanctity of marriage" than this damning revelation of how many married people do not value fidelity, integrity, and honor.
Posted by Unknown at 8:44 AM