Our particular assignment was to stand at the end of the food table and offer to help people carry their heavily-laden trays while they got drinks and some baked goods, and then get them settled at a table to eat their bounty. At first, the kids were a little shy about asking, but just a few minutes in, they caught the spirit of the service and started to get excited about helping. My middle child especially enjoyed asking every single person who came through the line if he could help them and would come running back after finishing with one person to help another, announcing with a big grin on his face how many people he had now helped - 25 by the end of the evening! 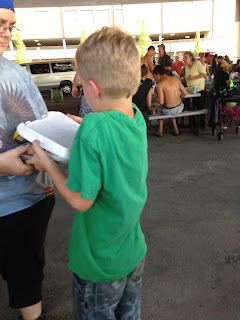 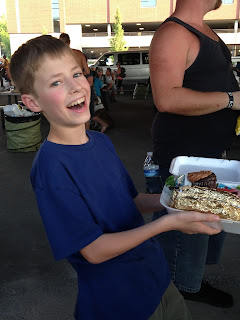 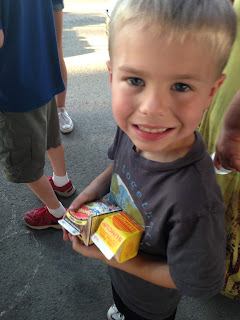 I was impressed by the well-oiled machine that BUTB has going. In addition to a generous spread of sandwiches, spaghetti, green salad with dressing, watermelon, cupcakes, and chips for dinner, there was a bounty of options for beverages: bottled water, various juices and pop, chocolate milk, lemonade, and sweet tea. They also had a table set up with baked goods of every kind - cookies, cakes, cinnamon rolls, donuts, croissants, and more. There was even a station for Italian sodas! And no limits. Everything was take-as-much-as-you-want and many people came back for seconds or to take extras so they'd have something to eat the next day.

After they were done eating, they could peruse a table piled high with donated clothes, collect some pet food, and gather groceries, too. There was even a Christian rock band set up in the corner playing music the whole time.

All three of the boys said they felt good about their service and wanted to do it again. We'll definitely be back!

When you stop to think about it for half a second, it's ridiculous that so many Westerners have a single image of what Africa is - a continent that covers 11.7 million square miles, is three times the size of the US, and contains more than 50 independent countries. As Chimamanda Ngozi Adichie says, there is danger in a single story. Click on the link above and learn about a few more stories of Africa today.

In my ongoing efforts to better understand racism and my part in it, as well as how to teach my children about the issues surrounding racism, I ran across this article: "4 Things We Should All Teach Kids about Racism Right Now". It provides a simple outline of four important concepts to teach kids explicitly. (Studies have shown that kids don't automatically pick up on anti-racist  messages communicated implicitly by their parents. Some things need to be spelled out clearly.)

And if you have difficulty with the idea of white privilege, read "When Whites Get a Free Pass" or watch the cartoon here.

"Colorblindness" isn't the answer either. Read "7 Reasons Why 'Colorblindness' Contributes to Racism Instead of Solves It" for a very thorough explanation of why.

And this post - "I Don't Know What to Do with Good White People" - was hard to read, but made me even more committed to educate myself, to speak up, and not to be part of the problem, even unwittingly.

To end with a little levity, I present "Book Lovers On Instagram Vs. Reality". While I am not an instagram user, and probably never will be, I can appreciate the contrast between the carefully crafted images presented to the world and the reality that is always a bit messier. And #10 is so, so true.
Posted by Unknown at 5:00 AM