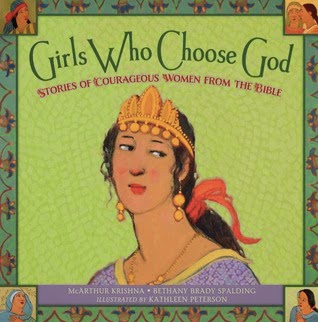 When this book first came out, I snagged a copy to give my niece for her birthday, only to find out that her mom had the same idea and had already purchased one for her.

I was thrilled.  Because that meant I got to keep it!

Girls Who Choose God: Stories of Courageous Women from the Bible is exquisite.  I love how each woman's story is given full attention, from well-known women like Eve and Mary to unnamed women like the Samaritan woman at the well.  For each woman, the authors lay out her dilemma, and present the reader with the same options as the woman faced.  The next page explains what the woman chose and again asks the reader to consider how he or she can be like this admirable woman.

Deborah has long been a heroine of mine, but too often in Sunday School she is presented as little more than Barak's sidekick which annoys me to no end, so I'm including her story here.


Deborah was a prophetess and powerful judge, and people in Israel traveled long distances to hear her wise counsel.  Sitting beneath a shady palm tree, Deborah settled conflicts and worked for justice.  She worried about the hardships her people suffered under the rule of a cruel Canaanite king.  Deborah wanted to free her people, but they had lost their faith in God's power to deliver them from bondage.

Deborah had a choice to make.  She could watch her people suffer,

she could teach them to trust in God...


Deborah knew she must lead her people to freedom.  She inspired the Israelites to change their hearts and trust in God.  Then Deborah gathered an army of 10,000 soldiers and prepared them for battle.  Her soldiers had only simple weapons, while the Canaanites had 900 chariots.  But God revealed to Deborah how and when to fight, and the mountains and clouds defended the Israelites.  Working in partnership with God, Deborah led her people to victory.

When have you chosen to be a leader?

Everything about this book entices the reader to feel a connection with these remarkable women, many of whom we hear far too little about.  They are depicted as agents unto themselves, rather than as supporting characters in other people's stories, which is unfortunately often the default position for women in the scriptures.  The thought-provoking questions invite introspection.  The illustrations are warm, unique and stunning.  All three of my boys have voluntarily opened this book, read the stories on their own, and asked questions about these women and their choices.

I can't help but think that having more children, both boys and girls, as well as more adults become familiar with these stories will broaden our perspectives on the wide range of good things that women can accomplish when working with God.

illustrated by Kathleen Peterson
ISBN: 9781609078829
Buy it from Amazon here: (hardcover, ebook)
Find it at a local independent bookseller.
Look it up on Goodreads.
Check it out at your local library (find the nearest one here).
Posted by Unknown at 9:51 AM