Last summer I bought tickets to a Bon Jovi concert for my husband for Fathers' Day and his birthday (both in June), for my oldest son's birthday in July and my other sons' birthdays in October.  (Yes, it counted for a lot of birthdays and holidays, but hey - they were not cheap tickets!)  Gene has been educating his children in the ways of 80s and 90s rock - the good stuff - and has managed to raise three of the biggest Bon Jovi fans the world has ever seen.  The big day finally came this past weekend and we had a blast!

We got there at about 7:00 and the show didn't start until 8:00, which is the boys' normal bedtime, so I was really impressed at how well they did at waiting patiently for Bon Jovi to appear.

There was no opening act and the show went from 8:00 to 10:30.  Jon Bon Jovi literally sang for two and a half hours straight!  While dancing and running all over the stage.  I'm seriously impressed with that man's stamina. 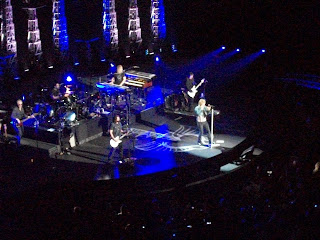 And he mixed it up with a slower acoustic set out in the middle of the audience, too: 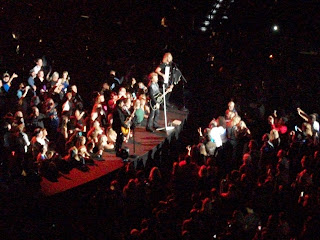 We even got to do a good deed!  About halfway through the concert, a woman sitting behind us tapped me on the shoulder and asked if we had any extra earplugs she could buy off us.  The volume was making her seven-year-old daughter miserable and she hadn't thought to bring any.  Luckily we had several sets to spare, so we just handed one back and wished her well.

Evan fell asleep about halfway through - it was way past his bedtime, after all - though he did wake up for the four-song encore which included "Wanted: Dead or Alive" and "Living on a Prayer", two of his favorites.

Josh was fading by the end, but he humored me by getting up and dancing with me for a while until he finally announced in my ear, "Mom, gravity's hit me.  I gotta sit down."

Will didn't like the bright lights that kept shining in our eyes, and by the end he was definitely ready to go home to bed, but he knew every word to almost every song JBJ sang.

They all had a great time, and so did their parents.  Making (somewhat unconventional) family memories... :)
Posted by Unknown at 5:00 AM