I got a little behind on my book reviews, so I logged in online to try to renew a couple of library books to give myself a bit more time to write.  Unfortunately, the system doesn't allow you to renew books that have already been requested by another patron and one of the books had, so I made the conscious decision to hold on to that book a couple of days past its due date.  In the mean time, a couple of other books I'd requested came in, so I ran into the library to pick them up.  As I was checking them out, the librarian who scanned my card, and whom I see on a frequent and regular basis, gasped in mock horror.

"Emily, I'm shocked.  You have an overdue book!  Has that ever happened before?!?!"

It's nice to have a reputation as a generally responsible patron of your local public library.

(And for the record, yes, it has happened before, though the total I've paid in library late fees in the almost 15 years I've lived in Spokane is well under $5.  Point of pride.)

Some friends had us over for an evening early this week and introduced us to a new game: 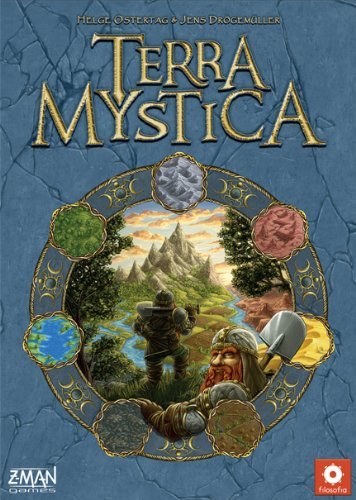 It's like Settlers of Catan, Puerto Rico, and Ticket to Ride all had a baby together and that baby played with some radioactive dice and developed gaming superpowers.  There are literally hundreds of little tokens or pieces and a dozen different aspects of the game to keep track of and you will feel so incredibly lost the first time through.  It will blow your mind.

And then you will be hooked.

Can't wait to play it again...

Through a rare confluence of events, I've had the opportunity to watch significantly more movies than usual over the past week.  Seven, to be exact.  I may even get around to writing up reviews for a few of them.  Of the five that weren't documentaries, two even passed the Bechdel test, though both of those just barely squeaked by.

Perhaps because I watched so many more films than I normally do in a short time period, this week it seemed far more apparent to me that in many (most?) films, male characters are the default, the norm, the automatic and assumed standard.  Female characters are often included as little more than "eye candy" or so the hero had someone to rescue.  And it really kind of pissed me off.

Sometimes being a feminist really gets in the way of enjoying mindless entertainment.  Sigh.

Several of my family members are very sensitive to certain fragrances, so I never wear perfume and I don't often have aromatic candles or incense in my home, but a couple of months ago, I purchased a plug-in warmer from Scentsy.  I placed it in my living room, next to the loveseat where it would be out of the way.  Or so I thought.

In the meantime, my four-year-old invented a fun new game to play in the living room.  It's called Start-By-The-Piano-And-Run-As-Fast-As-You-Can-So-When-You-Leap-On-To-The-Arm-Of-The-Loveseat-You-Have-Enough-Momentum-To-Flip-Yourself-Up-And-Over-And-Land-In-The-Middle.  An unfortunate side effect of the leaping and flipping part is wildly flailing legs that knock into plug-in warmers and splash hot wax all over the microfiber loveseat.

Google told me to scrape off the excess wax and then use a warm iron over a paper towel to soften and remove the rest.  It didn't work.  So I moved the end table to the affected side and tossed a blanket over the corner to hide the mess.  Maybe it'll look intentionally artsy?
Posted by Unknown at 5:00 AM