Lessons from Alice Herz-Sommer: "We all see only what we want to see." 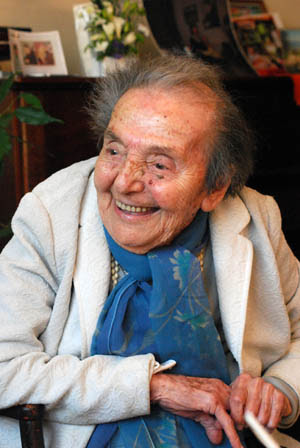 In my column published on Meridian Magazine today, I highlight two books about the life of Alice Herz-Sommer, the world's oldest living Holocaust survivor.  She spent almost two years in the Theresienstadt concentration camp from the summer of 1943 until liberation in May 1945.  Despite the horrors she saw and experienced there, including the loss of her dear husband and many friends, to this day she maintains an almost unearthly sense of optimism and love for her fellow human beings.  Go read my reviews here, and I'm confident you'll add Alice Herz-Sommer to your list of heroes.

After a hundred-plus years of life, she has some very astute observations about people. There are a couple in particular that really got me thinking, beyond what I could put in the other review, so I'm going to take a post or two to type out my thoughts on them.  Here's the first:

Alice said this regarding the Red Cross workers who came to the Theresienstadt concentration camp and bought the Nazi propaganda that Jews were being treated well.  In anticipation of their visit, the Nazis had shipped out several thousand prisoners to death camps so it didn't look as crowded as usual, cleaned up the barracks and surrounding area, printed fake money and created a fake bank, staged false businesses including a bakery complete with delicious baked goods the prisoners weren't allowed to touch, cleaned the streets, planted flowers, installed playgrounds, and instructed the inmates to be cheerful and assure the Red Cross that they were happy.  They then carefully herded the Red Cross visitors through a precisely orchestrated dog-and-pony show designed to minimize their contact with any of the prisoners who might let the pretty facade slip.  And the Red Cross bought it.  They saw what they wanted to see; people who may have been confined to one place, but certainly weren't being treated like animals or, unthinkably, exterminated.  Of course, after the outsiders had left, conditions at the camp returned to their normal, bleak, dehumanizing condition.

But it's also a statement on how Alice survived those deplorable conditions.  She saw what she wanted to see, and that was that through the ugly reality, beauty still existed.  She saw the goodness and courage and humanity displayed by her friends and loved ones, the strength and passion of the music she played and heard.  She also consciously chose to look ahead, rather than behind.  Instead of dwelling in the dark of her horrible time in Theresienstadt, she decided to look to the future and see what she wanted to see there: a productive and fulfilled life together with her son.

When I was in high school, I attended a part-day magnet school for the arts and studied theatre.  One year we developed our own original play based on a collection of poems written by children in the Theresienstadt concentration camp, called "I Never Saw Another Butterfly."  As a teenager, it was deeply affecting for me to learn in depth about the Holocaust and Hitler's unimaginable Final Solution.  After each performance we had a question & answer session with the audience.  One night, my high school German teacher asked how we felt about the German people after studying the Holocaust, and with my teenage arrogance and self-assurance, I raised my hand and said some incredibly poorly-worded and impolitic version of this:  "I've been learning the German language for a couple of years and have grown to love the German people and culture.  A lot of the regular German people didn't really know what was going on.  They didn't realize what the ultimate plan was..."  At this point another audience member cut in and basically dressed me down for being a Nazi apologist.  It was one of the more embarrassing moments of my life.  If I could go back, I'd say something like this:

"It's human nature to see only what we want to see.  Many of the German people saw that Hitler was offering them a scapegoat in the Jewish people and grasped at it with both hands.  After all, if they could blame all their problems on the Jews, if it was someone else's fault, they wouldn't have to face hard truths about their reality.  They took advantage of their Jewish neighbors, former friends, hovering like vultures, waiting for their forced evictions, confiscating their property and their homes, refusing to stand up for them out of fear or indifference.  They allowed themselves to see their Jewish neighbors as less than people.

"While Hitler's Final Solution was kept a secret from all but the highest levels of German leadership until the very end, as a whole, the German people at the time, as well as many others around the world, didn't open their eyes to see the injustices being committed because they didn't want to.  It was easier not to.  There is a responsibility inherent in truly seeing, in claiming accountability for one's own actions.  If you acknowledge something terrible is happening, your humanity, your very soul, will demand that you do something about it, or your choice not to act will fester and haunt you, and change how you see yourself and even who you are.

"There were some Germans, and those from other nations, who courageously hid Jews, or refused to participate and resisted every way they could.  And we all hope that if we lived during that time, we would have been among those who would have resisted, who would have stood up and said, 'No, this is wrong,' even at the expense of our safety or our family's lives.  But the only way to know that for sure is to act that way in our own lives now.  We need to decide that we will be among those today who strive to see things as they are; who refuse to accept the easy, placating answers; who will acknowledge and even embrace the hard, sometimes ugly, truths, but will also look for the goodness and beauty that still exist; and who will then work to make the situation better however we can."
Posted by Unknown at 8:56 AM